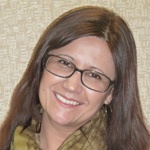 I was interpreting for an insurance company’s female claims representative. The limited English proficient person was a mother whose son had attempted to commit suicide by driving his car over a cliff.

When the mother reported the incident she was close to tears but tried to keep herself together as much as she could. It was so inspiring. As a mother of a 16-year-old, I could relate to her.

Both the insurance company’s representative and I showed empathy, understanding, love and compassion for this woman. The conversation went extremely well, though it was so obvious the three of us were fighting to control our tone, and our tears.

At the end of the conversation I found myself praying that the Lord would comfort that mother and would use other people so that this horrible circumstance could bring life and redemption into that young man’s life.

Amazingly, the car could not reach the edge of the cliff because a stone got in the way. Obviously there is a purpose to this man’s life.

There was a kind of bonding among the three of us women during the course of this conversation. It was there in the tone of our voices that we had made a difference in this mother’s life.