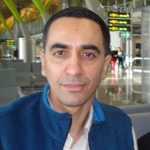 As interpreters, we are called upon to interpret various calls that deal with very different situations, some of which can be extremely serious and emotional, others very light and funny.

One call that stands out for me is one that I received from the labor and delivery department of a hospital. I had no idea when I answered that call that it was going to last for almost 5 hours!

It started with this future mom who was being admitted to the hospital. She did not speak a word of English and I do not believe she had anyone there with her who did. I could almost feel her breathe a sigh of relief when I introduced myself and told her that I would be interpreting for her.

She was surrounded by nurses and doctors who spoke a different language and she had no clue what they were telling her. So, I am sure it must have felt comforting for her to know that there was someone there who was going to serve as a bridge between her and the healthcare providers.

Once she was done with the admission and the anesthesia, the moment of truth came. She was ready to deliver.

All of a sudden the atmosphere grew electric. Everyone in the room started shouting at the same time “push! push!” and without realizing it, I found myself screaming into the phone.

Then, all of a sudden, we heard the baby’s first cry as it came into the world. There was a palpable sense of relief and joy among everyone there, and I felt so privileged to have witnessed such a special event from start to finish and definitely felt that I had made a difference that day.