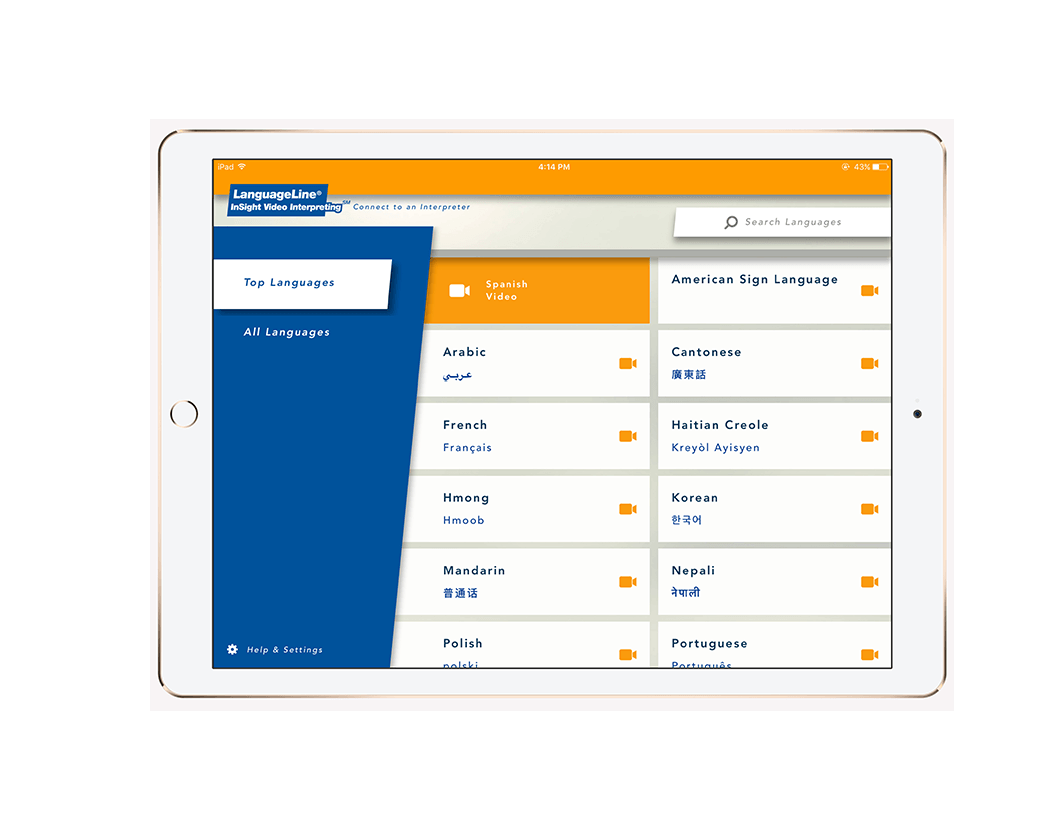 Accessible via tablet, smartphone, or PC, InSight replaced the need for phone lines or specialized equipment when it was released a year ago. Every InSight session is natively encrypted, which ensures privacy and eliminates the need for VPN tunnels.

The application enables fast, one-touch access to more than 9,000 professional linguists, who provide interpreting via live video in 35 top languages (including American Sign Language) and audio-only interpreting in 240 languages. InSight’s video component facilitates full understanding through both spoken and visual communication, which reduces the risk of misunderstanding by capturing body language and facial expressions.

InSight has received thousands of installations throughout North America since it was launched a year ago. Users report that InSight is extremely easy to use, as well as being an indispensable resource in improving customer and patient satisfaction in hospitals, retail locations, banks, government agencies, and law-enforcement settings.

InSight allows users to rate their completed session and provide the LanguageLine team with valuable instant feedback. Over the course of hundreds of thousands of InSight calls, users have given an average score of 4.6 stars (out of a possible five).

“It is a tremendous honor to receive the highly coveted Best in Biz Award,” LanguageLine Solutions President and CEO Scott W. Klein said. “InSight was an incredibly ambitious solution when it was released a year ago. We are thrilled that it is having the desired impact in alleviating language and cultural barriers for the communities we serve.”

Each year, Best in Biz Award entrants extend across a spectrum, from some of the most innovative local start-ups to the most recognizable global brands. The seventh annual program was hotly contested, with hundreds of entries from an impressive array of public and private companies of all sizes and from a variety of industries and geographic regions in the U.S. and Canada.

Since 2011, winners of Best in Biz Awards have been determined based on scoring from independent judging panels composed of prominent editors and reporters from some of the most respected newspapers, TV outlets, and business, consumer, technology and trade publications in North America.

“Reviewing this year’s entries was like going to an NBA All-Star game – you end up shaking your head in amazement,” said Dale Dauten of King Features Syndicate, who has judged the Best in Biz Awards for six years. “And the next one is even better. It’s a ‘top-that’ competition.”

LanguageLine Solutions has been the global leader in innovative language-access solutions since 1982. The company provides the highest quality phone, video remote, and onsite interpreting, as well as translation, localization, and testing and training for bilingual staff and interpreters. Trusted by more than 27,000 clients to enable communication with the limited English proficient, deaf, and hard-of-hearing communities, LanguageLine delivers the industry’s fastest and most dependable access to highly trained, professional linguists in more than 240 languages, 24 hours a day, seven days a week, 365 days a year. LanguageLine facilitates more than 33 million phone, video, and onsite interactions every year, which amounts to a new connection every second.